Social runs involve club members getting together with their cars to take a trip to some pre-determined destination. Some of these are regular monthly runs, such as the 'Old Speckled Hen' run and others a regular annual run such as the Daffodil run and the Big Brekkie run.

From time to time the club organises Trials and other competitive events and there are, generally two other annual events, the Easter Rally and the Mid-Winter Run that we run with the Auckland Club. More detail on these events are below:

The Old Speckled Hen runs are named after the famous MG car which was used as a runaround for workers in the MG factory and parked outside the paint shop. Over years of service, the car became covered in flecks of paint, gaining it acclaim in the town and earned it the nickname "Owld Speckled 'Un", which then translated into Old Speckled Hen.
The Old Speckled Hen Run, held on the last Thursday of each month, is an event for retirees and those that can get away from work during the week to exercise their MG. The run usually ends up at a place of interest, a cafe or a restaurant after a pleasant, short or sometimes longer drive over some more unusual routes.

If you would like to join the run you will find a link to the organiser of each run on the Events Calendar page.

This is an annual run held in early spring, usually early September. Members meet at the carpark at the Hutt Valley side of the Haywards Hill road and travel in convoy over the Rimutuka hill to the daffodil picking site at Middlerun just out from Carterton. A small fee is charged to pick the daffodils with all proceeds going to the local charities, Plunket and St John. The Daffodil Festival offers an abundance of activities ranging from the famous Daffodil picking , markets along High and Holloway Streets with dozens of stalls featuring local crafts and art and children's entertainment, the Wai Art sale in the Events Centre, the opportunity to wonder round the immaculate grounds of historic Carrington House and loads more. After picking is over, Lunch is provided at a local hostelry and then we often organise a run to another venue before heading home.

This is an annual run for breakfast at the Dish restaurant in Masterton. Members meet on SH2 just North of Upper Hutt and travel in convoy over the Rimutuka hill to Masterton. After breakfast there is usually a visit to a site of interest.

The Cecil Kimber run is held each year to celebrate the father of the MG's birthday. Runs are usually held some time between April and June and comprise a tour around the Wellington region with a competition involving questions about the route. The run usually ends in brunch at a local restaurant.

A purely social activity, where we select a destination somewhere not too distant and basically ramble our way there for lunch, in as near to a convoy formation as the other traffic will allow. 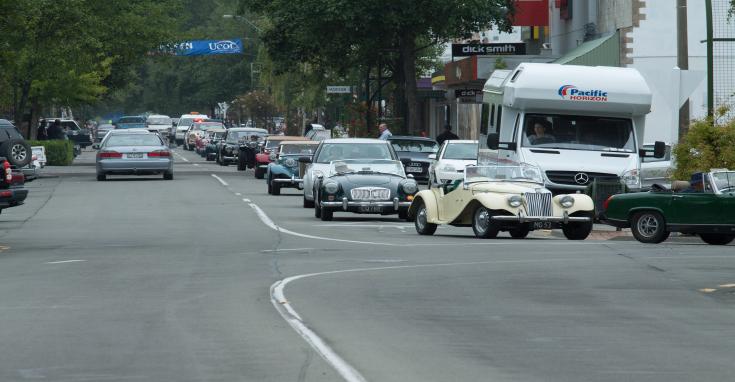 The club is often invited to join in various parades carried out in the region. The Tawa Christmas parade is a regular just prior to Christmas. An opportunity to display your toy and share the pride of ownership with a large number of children. Highly recommended, although it can be a little hard on your clutch leg and your cooling system is well tested. We are also usually invited to any other special occasions that happen along.

A number of car displays are attended by the club during the year. In some cases, generally to celebrate a special anniversary - such as 50 years of the MGB - the club might mount a display in town, often called a 'shine and show'.

British Car Day is run, generally on the second Sunday in February each year, at Trentham Park, Upper Hutt. Most years you can see around 400 classic British cars on the park - a great sight The club puts on an excellent display with our marquee and a display of regalia and information about the club. We generally get 30 to 40 cars in attendance and arguably have the best display on the day. The club won Best Display two years running in 2010 and 2011. 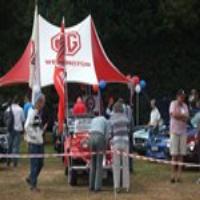